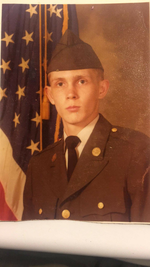 James Scott Green, age 56, passed away suddenly. He was born in Concord November 7, 1961 to the late Margie E. Norris. In addition to his mother, he was also preceded in death by his brother, Mark Fleming; his step dad, James Norris, Sr.; his grandparents, James and Sallie Edwards and his aunt, Doris Edwards.

Scott proudly served his country in the United Stated Army. After returning from his military service he began working in construction. He enjoyed camping and spending time outdoors.