To share your memory on the wall of Lewis Curlee, sign in using one of the following options:

Dr. Lewis Elton Curlee, 91, passed away peacefully at home with his family at his side on June 3rd.

Dr. Lewis Elton Curlee, 91, passed away peacefully at home with his family at his side on June 3rd.

Lewis was born in New Salem, NC on December 30, 1928 to the late, Seaborn and Mary Smith Curlee. Lewis graduated from Bowman Gray School of Medicine at 21 years of age. Because of his early graduation, he joined the Air Force for four years and then opened an orthopedic practice in Concord in 1957 where he practiced for many years. He then became a professor of orthopedic medicine for the Navy and taught at several locations including Tufts University in Boston until his retirement.

Lewis was also preceded in death by his siblings, W.R. Curlee, Warren Curlee, Sue Curlee Baggs, and Geraldine Barries. He is survived by his wife, Buaban Curlee, and many nieces and nephews. Lewis loved spending time with his wife and his best friends: his dogs, Buddy and Hank.

We would like to thank Hospice for their support, Annette Davis, Lewis’ nurse, and also Lewis’ caregivers Cris Pulliam and Alexis Stiltner.

Funeral Services for Lewis will be held Saturday, June 6 at 10:00 a.m. at Cabarrus Funeral, Cremation & Cemetery in Concord.
Read Less

To send flowers to the family or plant a tree in memory of Lewis Elton Curlee, please visit our Heartfelt Sympathies Store.

Receive notifications about information and event scheduling for Lewis

We encourage you to share your most beloved memories of Lewis here, so that the family and other loved ones can always see it. You can upload cherished photographs, or share your favorite stories, and can even comment on those shared by others. 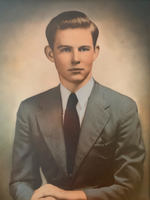