To share your memory on the wall of Pastor Eustace Okoeka, sign in using one of the following options:

How do I start? What can you say about such a great man of God, a man of Love, a man of
Integrity, a man of Faith, a man of Character, a man of Dignity, a man of Strength, a Father to
the fatherless,... Read More
Charlotte, North Carolina

How do I start? What can you say about such a great man of God, a man of Love, a man of
Integrity, a man of Faith, a man of Character, a man of Dignity, a man of Strength, a Father to
the fatherless, a brother to the brotherless, a man of Hope and a man of Wisdom. These are
just a few of the words I can find to describe this great man.

Pastor Eustace Okoeka was born on September 10, 1968 in Nigeria during a very intense time
of civil war. Federal soldiers came into the city and would eventually escort his laboring mother
to the hospital for her to give birth to her second son. He transitioned into glory on July 18,
2020.

In 1984, Pastor Eustace graduated from secondary school and would go on to university at
Bendel State University in Ekpoma, Edo State, Nigeria. While a student here, he became the
friend, brother, father to many who would eventually become lifelong friends. Pastor Eustace
graduated with a BSc in Chemistry in 1991. After completing his National Youth Service, he
would eventually relocate to the United States in 1999 by the help of his close sister, Rita
Enaholo. Pastor Eustace has always remembered the generosity she displayed in assisting him
and has been guided in life to display the same genuine care and concern for anyone. Pastor
Eustace stayed with Francesca Enaholo in Lanham, Maryland after his relocation to the US and
has always remained close to the Enaholo family, their sons like his brothers for life. Pastor
Eustace would eventually go on to work at the National Institutes of Health (NIH) in Bethesda,
Maryland where he worked until 2006. He would ultimately complete his Masters of Science
degree in Environmental Management from the University of Maryland.

After his relocation to the United States, Pastor Eustace felt the call of his Lord Jesus Christ and
a deep desire to grow seriously in his commitment as a Christian and dedicated his life to the
ministry of Jesus Christ. He became deeply involved in Christ Embassy in Lanham, Maryland
and always had a deep desire to see the ministry of his beloved Pastor, Father and Mentor,
Rev. Chris Oyakhilome penetrate all over the United States. He prayed and fasted severally
over the years to see the vision of the LoveWorld Television Ministry expand into the United
States.

In December 2005, Pastor Eustace engaged Pastor Famesha, also a member of the Christ
Embassy church in Lanham, Maryland. This union was a work of destiny by the Holy Spirit.
Pastor Eustace worked closely with the ministry’s International Office based in the UK and
eventually was chosen to start a US based International Office. Every task given to Pastor
Eustace was one he took seriously and he ALWAYS made sure the work was done. Pastors
Eustace and Famesha began life together working in ministry moving from Maryland to the
Dallas-Fort Worth, Texas area, finally relocating to Charlotte, North Carolina in 2009 to further
the work of the ministry. He tirelessly traveled throughout the United States ensuring the
establishment and preservation of Christ Embassy churches helping to fulfill the vision of the
ministry. In 2012, Eustace and his wife, Famesha were ordained as Pastors in Loveworld Inc,
formerly known as Believers’ Loveworld Inc. Guided by the Holy Spirit, his wisdom, knowledge,
resourcefulness, dedication and commitment helped to develop the LoveWorld USA network in
the United States.

There is much to say about Pastor Eustace and his sudden departure from this earth will leave
a deep void in the hearts of all those he touched. Pastor Eustace was a man of Love and cared
deeply and genuinely for all those he shepherded as a Pastor and mentored as a brother and
friend. His astute wisdom, wise counsel, decisiveness, determination and thoughtfulness will be
dearly missed. Knowing him was a privilege and honor. He IS a man that once meeting, you
will NEVER forget. And we will never forget you, my love.

My love, Rest in the bosom of our Master and Savior, Jesus Christ until we meet again. We love
you so much.

To make contributions to the family, please visit the ‘Tribute to Pastor Eustace’ webpage on the
church ministry website via www.christembassycharlotte.org/pastor-eustace.

To send flowers to the family or plant a tree in memory of Pastor Eustace E Okoeka, please visit our Heartfelt Sympathies Store.

Receive notifications about information and event scheduling for Pastor Eustace

We encourage you to share your most beloved memories of Pastor Eustace here, so that the family and other loved ones can always see it. You can upload cherished photographs, or share your favorite stories, and can even comment on those shared by others.

Posted Jul 30, 2020 at 11:26pm
Dearest Famesha. Our prayers are with you and your family. Please know we care for you and we send our love. 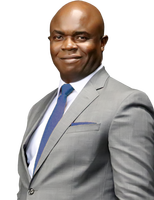