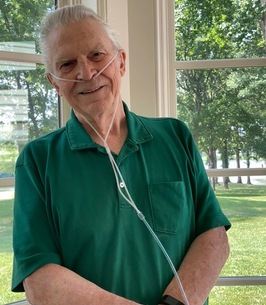 Ronald Lawrence Bill, age 84, passed away June 27, 2022 with family members by his side. He was born on April 23, 1938 in Hamtramck, Michigan to the late Stephen and Sophia (Jakubowski) Bill. He was also preceded in death by his wife of 60 years, Deanna Bill, and his brother, Stephen Bill.

Ron graduated from Cass Technical High School in Detroit, and he honorably served on active duty in the Air Force from February 11, 1957 to February 10, 1961. He was introduced to the love of his life by his best friend, Alvin Taylor, and their first date was at Dee’s high school dance. Ron and Dee were married on August 22, 1959 in Detroit. After their wedding, she joined him in Lincoln, Nebraska where he had already been stationed for two years of his four-year term. Their son was born in Lincoln.

After the Air Force, they moved back to Detroit where Ron began his career with IBM and where their two daughters were born. They subsequently moved to Warren, Michigan where Ron served as a Boy Scout Den Master. Afterward they moved to the Hudson Valley in New York where they lived in Poughkeepsie, Poughquag, and lastly West Ghent. Ron did not want his children to grow up getting into trouble on the city streets as he had, but rather he envisioned a country life of hard work and good values for them. The time they spent in West Ghent was indeed the highlight of their family life. While there they co-owned a horse ranch with Dee’s brother, Kenneth, and his wife, Phyllis. The two families shared a large, old, Victorian house on the property. Together they owned over 20 horses and boarded a dozen or so more. During this time, Ron spent his weekdays diligently working at IBM and his evenings and weekends mending fences, riding horses, and thoughtfully raising his children, who still love to tell stories about their very memorable childhood on the horse ranch.

Afterward Ron and Dee moved to Durham, North Carolina where he continued to advance in his career and where their children reached adulthood. Ron had started with IBM as a service technician, but he aspired to be a programmer. In the years that followed, he advanced from programming to managing programmers and ultimately to being an executive with multiple directors reporting to him. During his retirement, they enjoyed living in a log cabin in the mountains of Blowing Rock, North Carolina for 20 years. After Dee suffered a stroke in October of 2018, they lived with their son and his family in Waxhaw, North Carolina for nearly a year and then relocated to The Living Center of Concord, North Carolina for the next seven months. After Dee’s passing in May of 2020, he returned to his son’s home in Waxhaw for the last two years of his life.

Ron had many hobbies, including oil painting, wood carving, and furniture making. He was formerly an avid reader, especially of fantasy. He also enjoyed watching Fox News and playing computer, board, and card games. He had always been somewhat of a religious man, but during the last two years or so his Christian faith took a gradual turn as he started to grasp how much Jesus had done on that cross for him personally. He loved to hear Pastor Ryan Bradley preach about “healing a broken world with the bold love of Jesus” on Sunday mornings and would often lift his hands as we sang songs of praise to our Savior.